DD Dagger is recording a record with Sao Paulo producer Bruno Serroni entitled the Sao Paulo Sessions; on Loop Reclame Records, Brazil. The first single is Slipped into Sin! It is a duet with Brazilian Singer Papisa; Buy the Track HERE >  Papisa and Dagger are booking a tour together in Brazil for November 2020.  The second single is to be released in April of 2020 in Sao Paulo Brazil: It's a duet sung and co-written by Dagger and Bruno Serroni in Bruno's studio in SP.
UPCOMING Local Austin, TX SHOWS:
March 20 @ Cenote Cesar Chavez 3:00 pm
​June 6 @ Radio Coffee and Beer 10PM

UPCOMING Sao Paulo, Brazil Shows:
April 10 TBA
​April 15 TBA
Current Song List:
Fine Art is where I come from, and where I'm going:
Allyson Lipkin aka DD Dagger received an Art in Public Places grant to produce 3 large scale 4' diameter hanging glass umbrellas; which will be placed at The Pleasant Hill Branch Library in Austin, TX. For that reason, through September 2018 she is on a Dagger hiatus! For more info about TEMPO 2018 Click HERE>

For images of the large glass umbrellas click HERE >
​Art shots, live shots, & putting the muse in music. Paintings and Posters too...
Watch all the vids HERE! Click Playlist to choose. 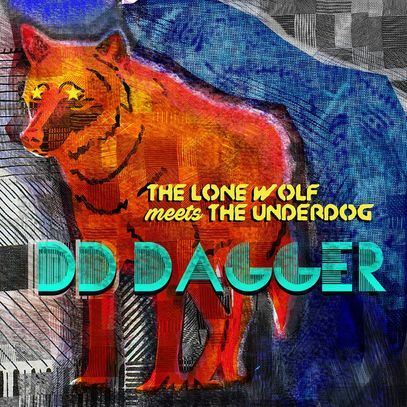 DD Dagger AKA Allyson Lipkin is an underground performance artist, composer, musician and saxophone player from Austin, Texas. She has finished another full length release with ATX Brass-man Jeff Luna entitled "The Lone Wolf Meets the Underdog". It got a fantastic review from the Austin Chronicle and on Greg Beet's top 10 local Artists of 2016 > Please purchase or listen to it!

Dagger has recently recorded a bunch of songs in  Sao Paolo, Brazil with producer Bruno Serroni! Last November 2016  she recorded three songs with guest artist Rita Olivia. The songs turned out SO GOOD she's going for a full length EP ::: to be recorded in Nov 2018

In Other news: Dagger just received city funding to produce a theatrical event with live music and an original score, dancers, and projections. This is called FRACTALS, New Movements and is July 1, 2017 at 8 pm at Esquina Tango. Please buy a TIX or Donate HERE>

In the meantime she is gigging with local hot shots Los Coast, Fastball, Minor Mishap, and the Cinematic Symphony with her bari sax

DD and Raindogg collaborated on a bunch of singles  off  ERODICA > Please Purchase This HERE! Raindogg directed the video "Brooklyn Girls" off Dagger's first release.

A few of DD's Songs are featured in a new documentary entitled, "Hotel Claremont". It's a short film about the long-standing seedy Hotel Claremont in Atlanta Georgia; which probably is being bulldozed for prime real estate AS WE SPEAK. View the documentary in the next film festival you're at! See some promo HERE>

Dagger finished producing the music for a theatrical movement piece entitled Sacred Space > It featured a live score, dance, and projections. The performance was July 8, 9, 10, 2016 at the Big Medium Gallery.

Don't forget::::it's ever so important!!>>come out and support the local arts. !!

Please listen to my latest interview with maestro Johnny Goudie! We talk about our unexpected history together in Houston, TX where, underage, I used to watch his band every weekend. I had no idea!!! He also *gasp calls my album brilliant! Thanks Johnny, that feels ever so delightful.

Episode 547: DD Dagger a.k.a. Allyson LipkinHello friends! I hope you all had a good weekend. I'm doing well. I've been working on a lot of busy work today. It's not super-fun but it leaves you woth a feeling of accomplishment when you finish... and that's pretty good. Right? I urge any of you musicians that live in Austin to come out to a panel I'm moderating tomorrow, Wednesday December 7th at at St. Elmo Sounstage from 7-9 pm. The Austin Music Foundation presents "Hit The Road Jack(ie): Touring Deconstructed" a panel on planning and managing go to austinmusicfoundation.org for more info.
My guest for episode 547 is multi-instrumentalist art-rocker, DD Dagger a.k.a. Allyson Lipkin! Allyson is releasing her brilliant new album, The Lone Wolf Meets The Underdogon December 17th. She's also having a release party on Sat. Dec 17th at Dozen Street. Go to dddagger.com for more info on the show and where to get the album. We sat down about a month ago and had a fantastic conversation about writing a "divorce album", making The Lone Wolf Meets The Underdog, playing with Los Coast, Fastball, Danger Cakes and others, staying sane through making art and much, much more! I hope you enjoy our conversation as much as I did. Let's get down!
Ciao! -jg
You know what REALLY HELPS? Starting A DD Dagger Station! Please support. Click on an icon of your streaming choice, sign in and make up a station. Streams = Revenue and circulation. Thanks!
DD Dagger © 2017 | www.dddagger.com | site design: Lipsting Media | music  | underground art | performance | composition | saxophone | visual art | instillation art